Through the July Haze

My seventh Winter's Riddle release is now live on the Kindle store.

The Smoke Monster tells the story of an amnesiac who awakens into a game of power played by two sisters across a decaying glacial valley.  Yet this noble caprice is overshadowed by a hazy blight of smoke which roils down the mountains with a life of its own.  Possessed of a troublesome heart the Forgetful Man seeks out his past and discovers that there is a certain peace in forgetting.  Yet, perhaps peace is nothing more than capitulation to the most monstrous aspects of the Riddle of Winter.


Trying to release a new ebook every month and this one puts me past the halfway mark.
Posted by Joshua Sterns at 4:37 PM No comments: 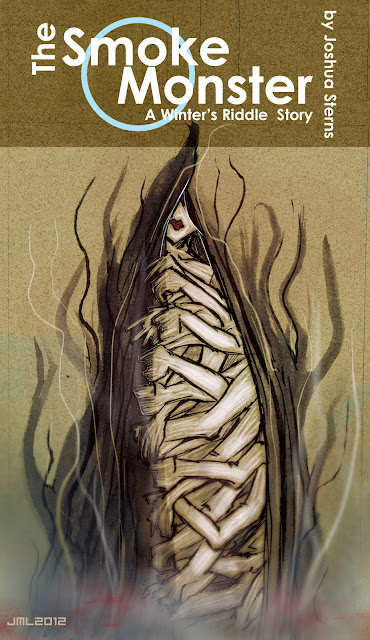 The Smoke Monster concerns an amnesiac swordsman and the dual kingdom he find himself in.  Regaining his memories may just be the the beginning of his troubles, the full scope of which lie shrouded in the mystic smoke haunting that place.

The second book in the "A Gathering Beauty" series of Winter's Riddle should be out soon and here is the cover.  It's great looking back at my original, primitive covers and see how far I've come with Justin M. Lewis.
Posted by Joshua Sterns at 1:45 PM No comments:

Winter revolves in a play of white and black, life and death, twin binaries orbiting the experiencing mind so that it seems the whole world vibrates, in danger of shaking apart.  In old Ruin there is civilization and barbarism, holding hands, exchanging gifts, blood, whatever else might make for an economy of opposites, while bold exponents raise their victories so their ribbons might ply the air to determine the winners and losers of the Riddle.  All their drive and ambition achieves nothing against the backdrop of endless snow.  They crouch in dust and wish at being the lost gods, only then would the proportions be right.
White and Black, the game of words, of thoughts scribbled, with either pale chalk or dark ink, marks a difference in contrast against the other, the open page, the blank slate.  We hunt for opposites in relief because it frees us from mystery’s court.  Look, see the play of stars on the field of the night sky, know there is something other than darkness.
There is no end to the snow and cold, the white expanse of Winter’s shroud.  It is not death, but many do die; it is not always, for there was once the warm times.  Gliding over the frozen skin the sun casts a thousand kinds of shadow across the textured surface.  Colors spring up, topaz, periwinkle, azure and aquamarine.  A multitude of plants grow, the snow lily with its sylph hair roots; the tolem tuber carving out a place in the frozen ground.  And cunning peoples find their way too, such as the Fencer and the Trumpeter.  Theirs is the compromise of adaptation.
The duality of White and Black fragments into a thousand shades, colors erupting, bright or muted, the total spectrum of experience growing.  It is as if Winter’s Riddle can’t abide the notion of the binary, of opposites which would compel a simple framework for experience.  The meaning of the ice age hides in the many, ignoring Summer, freezing the past, conjuring chaos and then holding it fast into adamantine still-life.
Lumnos’s talent was that he could read the play of White and Black, but like all expression it was an artifice, a tool used, a process.  He too was a blank slate, filling himself with ink where his memory once was.  Now he read this on the book before him, watching the letters vanish as they had from the mind of the man who stepped in from the darkened room, when the Uplifting had come and erased what had once been.

“When I was hungry I would climb to the upper city and hunt for rich food sometimes.  Corpses were our proper fare, but I felt a dull ache come over me when I ate the dead flesh.  Sensing my unease my fellows laughed and jeered at this squeamishness.  So I would flee the animal stares of the Rot, as much to get away from the eyes as to fill my belly with what I could steal from rubbish bins and gutters.
Near the edge of the pit there was this odd house made from dead plant flesh—wood as I discovered—and in it lived a strange man who would feed us tough, dry scraps from time to time.  He carried himself like he was from another world and rarely left his house.  He always seemed disappointed.
One night, after hearing enough cannibalistic babble, I ventured above, cautious for the metal sounds of Magpies and the violent swagger of the palace-braves; both enjoyed the sport of killing us Rotties who clambered up from our natural habitat.  The sky was clear and the second moon turned everything pale blue.
Down below I had left my scribblings on the tunnel wall, yet even though I couldn’t see them they followed me, in my brain.  Where do these things come from, these shapes and characters?  They are something like those we find on the leafy things the strange man gives us—those pages—but to me they mean the world.  If I do not make the marks on the wall I will go insane.
Tonight my madness took me up again, but I found I wasn’t hungry, or really my hunger had taken on a new and alien aspect.
The door would not work, so I broke open the window and set about my task.  Following some urge I raced down a narrow passage between two shelves.  At the far end there was a latch behind a certain book.  Opening this I knew my desire pulsed beneath the floorboards.  The lock on the safe spoke to me and it opened.  There was my heart, the one not in my body.  Taking it I ran from the dwelling and opened it and there on the blank pages words took form, and I knew these and they were mine.”
“It had not been so long since I was at my games of power.  The world was colder, a ruin, like the city whose name even I had no recollection of.  My upper estate lies as bones jutting furtively to the sky, my lower holdings long gone to abandonment, a place where fractured sewers dribble down the offal and detritus of the broken metropolis I had shepherded from its earliest beginnings.  Beyond my second palace my nous chimes silently in black light glory, awaiting my return.”
“Yet I am changed.  My mask is gone and now I wear a child of flesh.  We are one.  Through my ancient contingencies I have been reborn, but this corpse boy is stunted and full of heavy resonance, the kind which pulls the nous into a strange and terrible place.  We are full to the brim with the energies of the Black Lattice.
This holy grotto beyond the Palace of Chimes resounds with human darkness, its glory perverted by the natural order and the Riddle.  It has spoken to me and its waves and emanations are now mine.  Bodies dance.  I am set free.  Now that the others are gone who can stand against…whatever I have become?
These have been the thoughts written across my soul, just as I write across this nameless boy, a fusion of space and substance, emptiness and order.  I slosh about and am more than one and together we will both get our say.  As predicted opponents arrive with magic hidden in the seams, assassins of circumstance.  I must speak my heart, it is a flood of ink and I will write my will across the ice so that all will know.
The funny man has opened the book.  Their swords and magics, these I could defeat, but now they know and my heart is unwritten.”

Lumnos once again stood at the body-strewn base of the ruin, beyond which lay the pit which would one day be called the Rot.  Smoke and cloud cast a world in late afternoon grey.  Surrounded by dead doubles Sol, the red demon, the architect of the Uplifting, sat at the summit and considered his problems.
Great stress brought the wordseller out of time, his mind filled with what he read, the words piling up into a horizon of significance.  Under such duress he witnessed the past in greater detail, these first memories as vivid as the childhood he could only imagine.
Now he noticed the smoldering figures here and there, ashen statues in the shape of defeated mages, their fear and rage writ large across each face.  Here was Sysyn, Theb, Zoxx and the rest who chose to follow pride into that last conflagration with the red demon.  He knew them well from their carven legacies, but there were others who remained secret from his studies.  One wore a mask.  Now he saw them, now he didn’t, as they crumbled into motes and the motes into nothingness.
There was something else Lumnos noticed for the first time as Sol pulled up the strange magics from within the pit.  For an instant he wore a smile on his face, an enigmatic amusement, something unethical, like laughing at another’s misfortune.  It lasted for a flicker and then the crimson-robed man was gone.
This memory hung, moving and yet still, the way a page can remain unturned, the words breaking the linear line of action to conjure up the past in a frieze of expression.  Several tons of history connected like a puzzle.   There was Zeklos and the Ink, the Argent Lord and Sol’s actions on the mountain of clones, the blank ice of Winter and the Black Lattice, meeting together at odd angles as the pages in the Alabaster Palimpsest lost the last words.

Posted by Joshua Sterns at 1:55 PM No comments:

Posted by Joshua Sterns at 3:19 PM No comments: